After the success of Saarinen’s 70 series, which included the Womb Chair and Model 72, Hans Knoll was keen to get Saarinen designing an additional collection, based on the commercial success of the first.

Believing that he and Charles Eames may have been rather steered off course by plywood, following their original plan to create a structural total, Saarinen responded days later with ‘I am really very enthusiastic about the whole idea… I have come up with an idea that I think will wipe Herman Miller off the map.’

Highly competitive, Eames (for Herman Miller) and Saarinen (for Knoll), loved the thrill of cutting each other up with a headline-making design.

Friends since Cranbrook Academy they collaborated on several projects, including a ground-breaking collection of moulded plywood chairs for the MOMA-sponsored 1940 Organic Design in Home Furnishings competition that was awarded first prize in all categories.

Saarinen was itching to get ahead of the game again following his success with his Womb Chair for Knoll.

Destined to clear up what he called ‘the slum of legs’, Saarinen’s plan was to reinvent the base of the dining chair, creating it in one sleek piece – something that had not yet been achieved. Drawing on his early training as a sculptor, the ambidextrous Saarinen refined his design countless times, working with both hands, modifying the shape with clay again and again until he came up with curves he was happy with.

Rigorous testing was applied as family and friends were made to act as guinea pigs in the dining room of the family home in Bloomfield Hills, Detroit.

Had the technology been available at the time, Saarinen would have pipped Verner Panton at the post and made the whole chair in one piece of plastic, but the pedestal kept breaking.

So, with the help of Knoll employee Don Petitt, Saarinen was forced to put the sculptural fibreglass shell seats on an aluminium stem with a fused plastic finish.

The Tulip Chair, with (150) and without arms (151, remain part of a series of the most widely recognized furniture to date. It is certainly the collection that shouts ‘Knoll’ as soon as anyone sees it.

Saarinen designed his furniture to be democratic and without an individual dramatic statement. He saw furniture as architecture and refused to pander to consumer trends but, with the dawning of the space age, the Knoll Pedestal series became as ubiquitous in cool interiors of the fifties and sixties, as Twiggy was to sixties fashion.

It quickly became the go-to dining collection for its Jetson look, as well as for the space it afforded your knees.

Saarinen was never able to fulfil his dream of creating a one-legged chair in a single piece of plastic. Not long after the Tulip series was put into production, he died suddenly from a brain tumour, midway through designing the TWA Flight Centre at JFK airport New York.

Saarinen may not have finished his building, dubbed ‘The Grand Central of the jet age’ by architect Robert A. M. Stern, or achieved his structural total, but he certainly reinvented the chair with his Tulip. 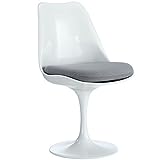