Who doesn’t love the Marshmallow?

In the years between the forties and early sixties architecture, art, design and advertising saw atomic motifs appear in a multitude of ways. Considered by some as the earliest example of Pop furniture, the Marshmallow Love Seat, with its multicoloured vinyl cushions and varnished steel structure, used brightly coloured dots to portray atomic particles.

Although it is attributed to George Nelson, the Marshmallow Love Seat was actually designed by Irving Harper, design director at Nelson’s own office, creator of the Herman Miller logo and the man behind most of George Nelson’s clocks and advertising.

The Marshmallow sprung out of a meeting with a salesman from a Long Island plastics company who showed Nelson and the team a product that he said could make 25 and 30-centimetre  (10 and 12-inch) round cushions quickly and economically by putting a pre-sealed skin into a mould and injecting plastic into it.

Nelson asked Harper to come up with a design, which he created in both a 10-inch and 12-inch disc version one weekend using a checkers set. He stuck the discs on a metal frame before drawing it up and set about creating a chair using eighteen“marshmallows” in an inventive pattern.

Unfortunately the plastics company could not actually fulfil their brief and the design turned out to be more expensive than Nelson first hoped. Harper had to get all the cushions made with a plywood back and added foam and upholstery.

What was meant to be a budget chair becomes a luxury statement.

Because the chair and advertising were all designed in-house by Harper, and the model used to advertise the chair on Harper’s posters was the company secretary, it did not cause Nelson too much financial distress and helped them market the George Nelson brand. But Harper was rather irked for not getting credit for what quickly became a museum piece.

In an interview with Paul Makovsky for Metropolis magazine in 2001, Harper explains“。.. There always had to be one name associated with the work. We couldn’t just spread it around. ” He goes on to say, “I’m grateful to George for what he did for me.

While he was alive I made no demands whatsoever. But now that he’s gone, whenever the Marshmallow Sofa is referred to as a ‘George Nelson design’ it sort of gets to me. I don’t go out of my way to set things right, but if anybody asks me who designed it, I’m perfectly happy to tell them. “

The smaller of the two Marshmallow Love Seats was reissued in 1999 as part of the Herman Miller for the Home line, and continues to be produced in limited numbers. Vitra also manufactures the chair under licence.

Only 186 Marshmallows were produced between 1956 and 1961. Now highly sought after, the midcentury productions go for tens of thousands whenever they appear at auction. 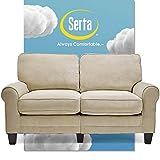