Mogens S. Koch, the son of the Danish designer of the same name, remembers his father pulling his Folding Chair, with its original canvas armrests, away from the fire at home for fear it would go up in flames.

One of four prototypes the Koch family were forced to keep because no one would buy them, this chair was so ahead of its time that when fellow designer Børge Mogensen asked his manufacturer Andreas Graversen of Fredericia Møbelfabrik to put the folding chair into production in the fifties, Graversen rather scathingly replied that he would not be producing furniture made from what he called “sticks”.

First unveiled at a church interiors competition in 1932, with wooden balls as detailing, Koch’s Folding Chair was influenced by Kaare Klint’s favourite book, Safari: A Saga of the African Blue. Klint was Koch’s teacher at the Royal Academy of Fine Arts in Copenhagen, and loved telling his students the story of American cinematographer Martin Johnson’s three-year African adventure with his wife in the twenties.

Koch, who later worked for him, particularly liked the image of the Johnsons sitting on the canvas and wood folding chairs of British officers outside their two-man tent. Klint also showed his students a folding stool he had designed in class with a student, based on the officer’s chair and using aircraft propeller shafts as inspiration for the leg design.

The Propeller Stool folded vertically and could be converted from stool into side table with the simple addition of a wooden tray. Koch wanted to make his chair equally easy to store and transport, without losing its sophistication. He used brass rings on all four legs to create a smooth closing movement and leather to take it up a notch. Like the officer’s chairs the Johnsons used in the wild, the Folding Chair stabilizes itself automatically when a person sits on it.

Koch refused to give up on his ingenious prototype, which, by using brass and elegant woods like beech and mahogany, offered a refined alternative to earlier safari and director’s chairs.

He introduced a more simplified version, without the ball detailing, at Copenhagen’s Annual Cabinetmakers’ Guild Exhibition in 1935 with extended arms that he was forced to whittle and attach himself after his carpenter made the “sticks” too short.

Ironically a Spanish firm who tried to copy the Folding Chair later chose this particular “extended” prototype and copies from this run have become a bit of a joke amongst Danish collectors.

No producer had the confidence to take the chair under its wing until designer Axel Thygesen from Interna happened upon Koch’s chair in an old Dansk Kunsthåndværk  (Danish Craft) journal. Recommissioned with leather arms as part of a collection that included a smaller Grandchild Chair created for Axel Thygesen’s daughter Michaela, the collection was displayed at Købestævnet, a manufacturers’ exhibition, in 1950. 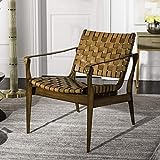