“The World’s Most Comfortable Chair”

You just have to look at the Chesterfield-style button studding and wingback points to imagine the whisky swilling and cigar smoking that would have gone on in the most recognized British armchair of the sixties.

G Plan designer Paul Conti would have been pleasantly surprised when his wingback armchair not only appeared in all the British mid-century cult spy series – The Saint, The Avengers, The Man from U. N. C. L. E. – but was later requested in black vinyl to seat one of the most famous fictional villains of all time, Ernst Stavro Blofeld, Ian Fleming’s super-scarred, pussy-stroking villain in the 1967 James Bond movie You Only Live Twice.

The company was formed in High Wycombe in 1898 by Ebenezer Gomme, a Primitive Methodist, but it was not until his grandson Donald Gomme oversaw a range of reasonably priced modern furniture for the entire house, which could be displayed in full room settings, bought piece by piece and collected over time, that G Plan came into being, in 1953.

The Coronation of a very young Queen Elizabeth II the same year marked a fresh start and even though some rations were still in place, young Britons wanted to mark the new beginnings by throwing out the old and bringing in the new.

Doris Gundry at British advertising agency J.Walter Thompson came up with the G Plan brand name and a flurry of marketing activity started, with an advertising push in glossy magazines, and showrooms dotted around the country. G Plan even had its own gallery at Vogue House off Hanover Square.

At the start of the sixties when the chair was launched, G Plan was the most famous furniture brand in Britain, and the Gomme family were very rich indeed after a company flotation on the stock market.

Previously advertised as “The World’s Most Comfortable Chair” and photographed with a matching footstool in a studio with prize fish on the wall, customers were given a choice of chrome or rosewood for the four-pronged stand or wheelbase on their G Plan Easy Chair.

Its swivel mechanism borrowed from executive chairs of the time with a rocking and gliding motion thrown in – one suspects more to help older people get up and out of the chair than to help the Blofelds of the world hatch their evil masterplans. 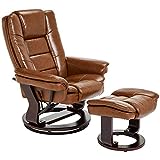 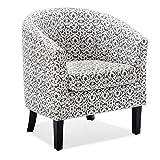