If you are Charles Pollock, chairs are sculptures for the soul. But being left out of the credits when you have put your all into a project can eat away at you.

So, with barely a dollar to his name, Pollock left George Nelson’s studio to open his own office in Brooklyn after the Swag Leg collection he designed with Nelson got worldwide attention, with no mention of Pollock’s input.

Pollock set about making models and full-scale prototypes out of plumbing unearthed from an abandoned basement and did what burgeoning designers did in New York during the mid-century years; he got in contact with the equivalent of a top brass director in Hollywood, design legend Florence Knoll.

Florence, the most powerful woman in furniture production had turned him down again and again, but Pollock refused to give up and went to the company she had headed up since the death of her husband Hans Knoll, armed with a prototype of his lounge chair.

Failing to spot the Knoll & Associates’ director as she was coming out of a lift, he literally bowled her over with his chair.

You would think that Knoll would have sent him straight back down in the lift, but senior designer at the time Vincent Cafiero, had seen him mentioned in a major article in Interiors magazine a few months before and reminded Knoll that Pollock was no freshman.

They had a potential star on their hands. Pollock received $20 for rent, a development allowance and the legendary Don Pettit to work with, a designer who had swapped George Nelson for Knoll years earlier.

After five years at Knoll, where he became so financially desperate, he had to divert electricity from a chemist in his building to supply his studio, Pollock unveiled what would become one of the bestselling office chairs of all time.

Simple to put together, and even simpler to break down, the beauty of the chair lies in its patented metal rim frame which not only protects the edges of the chair, but also makes the leather seat look like a sumptuous soft filling inside its curved polypropylene shell.

Available in a variety of upholstery options, not to mention different shell colours, this softer look for executives quickly became a visual symbol of the modern American workplace.

The Executive Chair or Pollock Chair, is still available and still meets the same exacting specifications as when it was created by Pollock and Knoll in 1963.

You can choose to have it with or without arms, wheels, 360-degree swivel, pneumatic height adjustment and tilt functionality.

If you have ever seen the film Catch Me If You Can, you may remember the FBI office filled with the chairs and Mad Menfans will recall Ted Chaough, Don Draper’s adversary in season four, described by Draper as ‘a fly I keep swatting away’,  sitting in the low-backed Executive Chair suggesting that he, like Pollock with Nelson, was better than he had yet been given credit for. 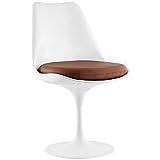