The birth of the ‘Egg Chair’ at the SAS House

When Denmark was threatened with Nazi occupation in 1943, Arne Jacobsen, of Jewish Danish descent, packed a small bag and rowed from Denmark to Sweden across the Sound with wife Jonna and Danish lighting supremo Poul Henningsen.

Jonna and Arne found work as textile designers, an experience that proved invaluable when Jacobsen moved from his wooden series to the upholstered chairs, he created for his SAS House in Copenhagen that opened in 1960.

Originally built for SAS air travellers in transit, this model hotel for the jet age was called the first “design” hotel as Jacobsen insisted on designing everything from the grip on the window shade to the walls of living orchids in the indoor garden.

Originally created with a palette of greens and blues, reflecting nature throughout, the hotel has since become an iconic landmark for lovers of Modernism.

The most ardent Jacobsen followers check in to Room 606, where examples of Jacobsen’s Egg and Drop Chairs, created at the dawning of this phenomenal project, can be seen upholstered in one of the many original natural colours that would have been seen in the bedrooms, duck-egg blue.

As much as Eero Saarinen’s Womb Chair kick-started the design process for a comfortable modern lounge chair, SAS chairs were technological innovations for their curviness. The Swan, Egg, Drop and Giraffe Chairs were created to furnish specific rooms at the SAS House.

Egg and Swan Sofas were also designed, but only three of the Egg Sofas were made as they proved far too expensive to produce. Legend has it that one even disappeared on the way to being installed in the SAS House.

Jacobsen loved using curved shapes as a contrast to the strict lines of his Functionalist buildings. Realizing he needed a low-backed lounge chair that would not ruin the line of his architecture from the outside, he designed the Swan with a bronze base to sit just under the windows of the Panorama Room, a bar with a view at the top of the hotel.

The Swan was an evolution on from an earlier ply chair Jacobsen failed to get past the prototype stage that combined seat-back and arms in one continuous form. Without the arms it became the 3107.

The Egg, meanwhile, had to be taller to work with the proportions of the grand lobby area which was a huge 700 square metres area and incorporated a line of shops.

Knowing passengers would be constantly surrounded by the toing and froing of people going from reception to bar to bed, Jacobsen gave his lobby chair sides that could envelop the sitter when they wanted to read a book, or newspaper, or have a snooze in transit.

He also put his Egg Chair on a swivel mechanism so you could move it towards or away from fellow passengers as the mood took you.

Designed to spin around effortlessly, early Egg Chairs, like the ones seen in the lobby of the SAS House, do not have the removable thin padded cushion or the tilt mechanism we see today.

Jacobsen perfected the sculpting of the Egg and Swan in his garage, working for hours on end moulding the plaster around chicken wire at weekends.

In the book Arne Jacobsen: Architect & Designer, Poul Erik Tøjner and Kjeld Vindum explain how Jacobsen had to adjust the Egg’s shape with model maker Sandor Perjesi as the plaster prototype looked too wide. 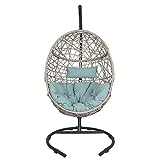 They cut the finished model in half before surgically removing two centimetres. Jacobsen tried the chair out on everyone from the postman to his work colleagues before it was put into production.

All of the SAS chairs were made using a fibreglass shell in cold-cured foam rubber before being hand covered tightly in a natural fabric like wool or leather.

Jacobsen wanted to ensure you could not pinch the fabric, so the leather had to be sculpted wet on to the chairs. There are no joins at all on the front in either fabric, except for at the very bottom of the chair in two lines either side and under the seat pad and then leading underneath in two curved shapes around the stand.

Two hides or pieces are used: one for the front and one for the back. Both chairs are painstakingly hand-sewn, with the fabric stitch appearing around the outside edge rather than right on the edge to give it a better sculptural finish.

Floating above their star stands, both chairs are incredibly light for such large pieces. Look for aluminium bases cast in one piece if you want an earlier edition.

Editions starting with a 5 will be the earliest as the date starts with the year first, followed by the number of the month, so an edition number 5910 will be from October 1959, for example.

An upholstered footstool was also designed for the Egg with an aluminium base.